Evolution, Religion, and the Nature of Society 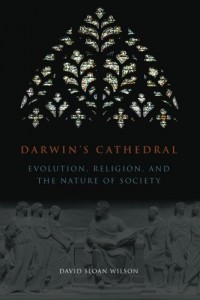 David Sloan Wilson is something of a quixotic figure in the field of evolutionary approaches to human affairs. For most of his professional life he has battled what has become a rigid orthodoxy against seemingly hopeless odds. The orthodoxy is that natural selection operates more or less exclusively at the individual level, and that natural selection between groups is a trivial phenomenon that has not left any important mark on the architecture of the human mind or on human history.

Furthermore, one of the great intellectual battles of modern times is between evolution and religion. Until now, they have been considered completely irreconcilable theories of origin and existence. David Sloan Wilson’s Darwin’s Cathedral takes the radical step of joining the two, in the process proposing an evolutionary theory of religion that shakes both evolutionary biology and social theory at their foundations.